My son is 11 years old and a sports fanatic! He writes a sports blog called SportsThrills, that is getting pretty popular. He is getting over a 100 pageviews on most days. I, being the geek I am, have been working with my son to get him interested in programming and App development. And I have succeeded. Not only in getting him interested enough to start programming, but enough to enter a Hackathon with him as a Father-son team. Even better, we won! The App we developed – very appropriately an App for Redskins fans – won the first prize at the Hackathon for Apps built using APIs provided by Mashery. My son and I are now hooked on mobile App development and also proud owners of a new Nexus 7, which was the prize we won. (My son, correction, is the proud owner of a new Nexus 7).

How we got there?

My son’s journey to winning a prize at his first Hackathon began at a Hackathon I attended a few months ago. This was at the MoDevTablet conference, where I was a speaker. I met the Sheedy’s at the Hackathon. Tommy Sheedy is 11 years old. He was participating on the Hackathon with his dad, a software developer. This was not their first Hackathon and not only did they produce an App, but because of his accomplishments at past Hackathons, Tommy was actually invited by Pete Erickson, the conference organizer, to be the wrap-up keynote speaker for the conference. I shower my son the video of Tommy’s talk and that is how I got his interest in coming with me to this Hackthan. So, kudos and thanks to Tommy Sheedy!

This past summer I had my son start learning how to program. He was just turning 11 and had Tommy as his inspiration. He started learning JavaScript on codeacademy.com, but we really never got to a stage where we were actually building an App. So, I saw this Hachathon at the MoDevEast conference (I was speaking here too), to jump in with both feet. We saw that Mashery was holding a competition for best App built using APIs they manage. Mashery is an API management company which hosts and manages APIs for companies like Best Buy, Expedia, USA Today, etc. ESPN, the sports media company is one of the companies that offers its APIs thru Mashery. Given my sons interest in sports, we decided to focus on that. Another Mashery API is the USA Today API for sports salaries. That would be the second API to use. We were going to build a Mashup App! 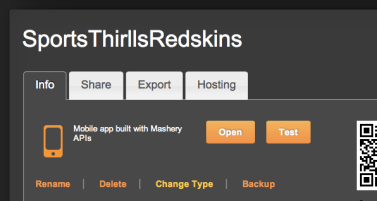 Choosing the right IDE was critical for us. For the Hackathon, we could bring no code in and had 8 hours to produce a working App. Furthermore, not only is my son new to programming, I am not a professional developer either. Neither one of us had ever produced a working mobile App before! So we were really looking for an IDE that would allow us to produce a Hybrid mobile App, using as much WYSIWYG and drag-and-drop as possible (or in other words, as little programming as possible). We settled on a cloud based IDE called Tiggzi. Tiggzi is designed for making Hybrid, jQuery + PhoneGap/Cordova based Apps using REST APIs. It has a great drag-and-drop layout editor for jQuery components and more importantly has an excellent tool to run queries on APs and map them to the GUI components of the App. While I would not use this for building a complex enterprise App, it is perfect for a Hackathon. We plan to export the code we created using Tiggzi and using IBM Worklight IDE to polish up the App and add features.

On our way to the Hackathon, my son started writing the requirements for the App. He came up with a list of 15 or so requirements that he would like the App to have. Everything a Redskins fan would like to know about the Redskins, in one App! When we reached the Hackathon, we were rearing to go. We quickly found out that ESPN does not allow full access to all its APIs to member of the public. So, (like a real development project) we had to scale back the requirements real soon. After two hours of head banging, we also found out that the USA Today salary API was unusable as the JSON it was returning was corrupted and could not be parsed. We validated that with the USA Today API person at the event.

So, we used multiple ESPN APIs in our mashup – the Headlines, Teams and Athletes APIs and built our App.

The way we divvied up the work was – my son focussed on the drag-and-drop screen construction and creating the API calls. He created over 50 API call URLs! I had him take a screenshot of every step he took, so we could track and review what he did afterwards. The desktop on his MacBook was full. I meanwhile focussed on mapping the API responses to the App widgets and the Javascript code that needed to be written to manipulate the data returned. We were a team!

The Hackathon started at 10 AM and we had until 6PM to produce a working App. We wanted to demo it on my sons iPhone and not on the emulator. My son was the one who was going to do the demo. I loved it! When they called ‘Hands off the keyboard’ at 6PM sharp, we were ready. Of course, at just that very time the internet access at the facility went out! So, our API calls were going to go over a slow 3G network. But we rocked! Or more importantly, my son rocked! He did an awesome demo of the App. It worked beautifully and we won! We won the first prize for the Best App built at the Hackathon using an API managed by Mashery! Of the 20 plus Apps that were demo’ed at the end of the Hackathon there were multiple Apps (i counted at least 9) that used Mashery APIs, so winning was really gratifying.

My son wants to continue with the App. We plan to have a mini-hackathon in our home the next weekend and the two of us will enhance the App. You will see it soon in the App stores out there. My son wants to sell it. I want him to pay for his own college. I think we have a deal! Wish us luck…

Check out my son’s Sports Blog – SportsThrills. Share your thoughts or encouragement for my son – leave a comment below or on his blog.

This site uses Akismet to reduce spam. Learn how your comment data is processed.